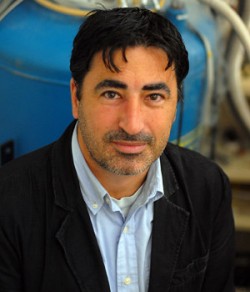 Enrique del Barco is Professor at the UCF Physics department and a recognized researcher in experimental nanoscience. His primary research interest is focused on the study of how the microscopic laws of physics –quantum mechanics– manifest themselves at a mesoscopic scale. The fundamental understanding of the quantum properties of nanoscale materials will lead to break-grounding applications in emerging technologies, such as molecular spintronics and quantum information and computation technologies. His research has produced seminal contributions to the field of molecular magnetism and nanoscale spintronics, having published close to a hundred peer-reviewed publications in high impact-factor scientific journals. These results have allowed the establishment of important international collaborations, and have been recognized by multiple invited talks at conferences and institutions around the world, and several awards, including the NSF CAREER, two UCF RIAs and the UCF Reach for the Stars award.

Del Barco has been involved in several curriculum development initiatives since joining UCF in 2005. He has been supported by NSF to restructure the introductory physics courses of the Physics department, a project with which he is still currently associated, implementing a new methodology based on on-line support for the labs. He has developed the outreach online blog www.highschoolscience.ucf.edu. The blog is offered both in English and Spanish (del Barco’s native language) in order to reach to the most diverse population of k-12 students. More recently, del Barco has led the creation of a new UCF Minor in Nanoscale Science and Technology which has been designed around three new core courses offered as Service-Learning in collaboration with middle schools in the Orlando metropolitan area. The aim is at transferring the excitement of current developments in nanoscience and nanotechnology to the middle school class in order to attract them towards STEM careers. In addition, he is currently the chair of the Senior Design Committee of the physics department and serves as member of the Undergraduate Curriculum committee of the Physics department. He has received several recognitions and awards for his educational activities, including the UCF Excellence in Undergraduate Teaching award, two TIPs and the Scholarship of Teaching and Learning award.