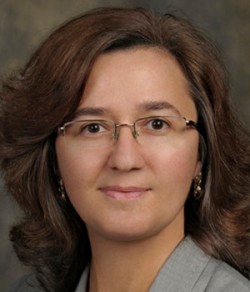 Damla Turgut is an Associate Professor in the Department of Computer Science at the University of Central Florida. She received her BS, MS, and PhD degrees from the Computer Science and Engineering Department of University of Texas at Arlington. Her research interests include wireless ad hoc, sensor, underwater and vehicular networks, as well as considerations of privacy in the Internet of Things. Her recent honors and awards include being selected as an iSTEM Faculty Fellow for 2014-2015 and being featured in the UCF Women Making History series in March 2015. She was co-recipient of the Best Paper Award at the IEEE ICC 2013. Dr. Turgut serves as a member of the editorial board and of the technical program committee of ACM and IEEE journals and international conferences. She is a member of IEEE, ACM, and the Upsilon Pi Epsilon honorary society.

Damla is currently the PI for the NSF REU Site on Research Experiences on Internet of Things (IoT) as well as the Co-PI for NSF RET Site on Collaborative Multidisciplinary Engineering Design Experiences for Teachers (CoMET) programs. She is also interested in increasing retention rates of women in computer science and applying big data techniques for improving STEM education for women and minorities.