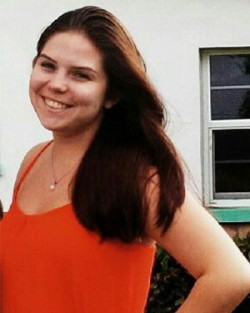 My name is Courtney Swichkow and I am a Mechanical Engineering major. This is my third year here at UCF. I graduated high school in 2013 from Edgewood Jr./Sr. High School which is a small school of choice in my hometown, Merritt Island FL. One of my favorite classes here at UCF so far would be the Introduction to the Engineering Profession class. It was really hands on and we got to build and program a little robot called the “boe-bot” which was the most fun I’ve ever had in class. It was what confirmed for me that I was in the right field because every time I got the boe-bot to do something new, I felt really excited and accomplished. This is part of the reason I wanted to get more involved with the STEM Ambassador program. Growing up I didn’t have any great examples of women in the STEM field, so I had no idea that girls did stuff like engineering. I also remember that being smart or “nerdy” had a negative connotation with it. I want to get rid of that negative connotation. I want to be an example for kids and show them that if I can do it, they can too. I really want to show kids how cool STEM can be. I hope to inspire more kids to get involved in the STEM field, to make the world greater than it has ever been. A word of wisdom for STEM students that I have learned from experience would be to never give up. There is going to be a time where you study really hard for a test and you bomb it. It happens. It’s going to feel like the end of the world at that moment, but trust me, it’s not. Accept it, figure out what you could have done better, prepare better for the next test, and move on. Don’t let yourself get discouraged; if you’re making mistakes, it means that you’re learning. In my free time I like to bake, read, listen to music, paint and craft, ride bikes, and think of ways to improve UCF parking.